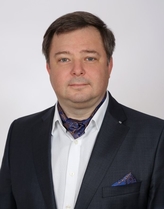 In 2020 Florian Rupp was appointed Professor for Mathematics at the Kutaisi International University. Since 2017 Professor Rupp was and is involved in various cyber and digitalization projects as the Director of the Think Tank Cyber and Innovation Labs, as Chief Digital Officer of RailMaint GmbH, as Senior Project Manager and later Principal Consultant at BWI GmbH. He is associated to the Research Center CODE at the University of the Armed Forces, Munich. Moreover, he is Partner at the Institute for Applied Mechanism Design (IFAMD) and at Transformation Consulting International.

Professor Rupp’s research interests comprise stochastic dynamical systems and their stability/ bifurcations, Hamiltonian systems and (classical) molecular dynamics, applications and mathematical modeling in Chemistry, Biology, Engineering and in particular the Social Sciences, as well as the simulation of PDEs with stochastic/ random forcing or controls.

He was the Professor at the Department of Mathematics and Science at the German University of Technology in Oman (GUtech), Muscat, Sultanate of Oman, from 2013 to 2017. Prior, he was Akademischer Rat a.Z. at the Department of Mathematics at the Technische Universität München. Since 2011 Florian Rupp is the Vice-President of the “Hurwitz-Gesellschaft zur Förderung der Mathematik an der TU München e.V”. Inter alia, he had several visiting faculty positions at the King Abdullah University of Science and Technology near Jeddah, Saudi-Arabia, the African Institute for the Mathematical Science in Cape Town, South Africa, the Technische Universität Wien, and the TU München.

In 2002 Dr. Rupp obtained his Diploma in Mathematics with chemistry as a minor at the TU München. During his PhD-studies he held a scholarship of the Deutsche Forschungsgemeinschaft at the Graduate School Applied Algorithmic Mathematics in Munich and received the degree of a Dr. rer. nat. in Mathematics under the supervision of Prof. Dr. J. Scheurle at the TUM in 2005.

Besides others, Professor Rupp is a member of the interdisciplinary pan-European research network Center of Conflict Resolution (CCR), and member of the International Editorial Advisory Board of the Proceedings of the Institute of Mathematics & Mechanics, National Academy of Sciences of Azerbaijan.