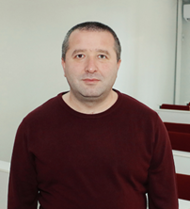 Besik Dundua is an associate professor at the Kutaisi International University. His research interests include theoretical foundations of computer science. He got his PhD degree in computer science from the University of Porto. Afterwards, he was a postdoc and a visiting researcher in Brazil (University of Brasilia), Austria (Johannes Kepler University Linz), and Germany (The University of Stuttgart). His work concerns various aspects of declarative programming, computational logic, and formal languages: foundational formalisms, computational mechanisms, and implementation ideas. He has published more than 30 papers on those topics jointly with researchers working in Austrian, Brazilian, French, Georgian, German, Japanese, Portuguese, Romanian and Spanish universities. His work has been presented at more than 40 conferences.

Before joining the Kutaisi International University, Besik Dundua was a professor and coordinator of BSc/MSc/PhD programs in computer science at the International Black Sea University in Tbilisi, and has taught various computer science courses in Georgia and abroad. He has been actively involved in several nationally and internationally funded research projects on computational logic, rule-based programming, and formal languages, and has often been the principal investigator. He has been awarded four special grants for young scientists: the Presidential Award in 2010, Alexander Kartvelishvili Award in 2019, the Rustaveli Foundation grants in 2015 and 2018.